The world of medicine is a world of uncertainty. We can never be sure of anything at 100%, however obvious it may seem a diagnosis, but we cannot beat right and left with ultramodern diagnostics techniques or treatments (that are never safe) when making the decisions that continually haunt us in our daily practice.

That’s why we are always immersed in a world of probabilities, where the certainties are almost as rare as the so-called common sense which, as almost everyone knows, is the least common of the senses.

Imagine you are in the clinic and a patient comes because he has been kicked in the ass, pretty strong, though. As good doctor we are, we ask that of what’s wrong?, since when?, and what do you attribute it to? And we proceed to a complete physical examination, discovering with horror that he has a hematoma on the right buttock.

Here, my friends, the diagnostic possibilities are numerous, so the first thing we do is a comprehensive differential diagnosis. To do this, we can take four different approaches. The first is the possibilistic approach, listing all possible diagnoses and try to rule them all simultaneously applying the relevant diagnostic tests. The second is the probabilistic approach, sorting diagnostics by relative chance and then acting accordingly. It seems a posttraumatic hematoma (known as the kick in the ass syndrome), but someone might think that the kick has not been so strong, so maybe the poor patient has a bleeding disorder or blood dyscrasias with secondary thrombocytopenia or even an atypical inflammatory bowel disease with extraintestinal manifestations and gluteal vascular fragility. We could also use a prognostic approach and try to show or rule out possible diagnostics with worst prognosis, so the diagnosis of the syndrome kicked in the ass lose interest and we were going to rule out chronic leukemia. Finally, a pragmatic approach could be used, with particular interest in first finding diagnostics that have a more effective treatment (the kick will be, one more time, the number one).

It seems that the right thing is to use a judicious combination of pragmatic, probabilistic and prognostic approaches. In our case we will investigate if the intensity of injury justifies the magnitude of bruising and, in that case, we would indicate some hot towels and we would refrain from further diagnostic tests. And this example may seems to be bullshit, but I can assure you I know people who make the complete list and order the diagnostic tests when there are any symptoms, regardless of expenses or risks. And, besides, one that I could think of, could assess the possibility of performing a more exotic diagnostic test that I cannot imagine, so the patient would be grateful if the diagnosis doesn’t require to make a forced anal sphincterotomy. And that is so because, as we have already said, the waiting list to get some common sense many times exceeds the surgical waiting list.

Now imagine another patient with a symptom complex less stupid and absurd than the previous example. For instance, a child with symptoms of celiac disease. Before we make any diagnostic test, our patient already has a probability of having the disease. This probability will be conditioned by the prevalence of the disease in the population from which he proceeds and is called the pretest probability. This probability will be somewhere concerning two thresholds: the diagnostic threshold and the therapeutic threshold. 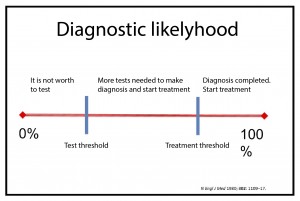 We’ll then make the indicated diagnostic test, getting a new probability of disease depending on the result of the test, the so-called post-test probability. If this probability is high enough to make a diagnosis and initiate treatment, we’ll have crossed our first threshold, the therapeutic one. There will be no need for additional tests, as we will have enough certainty to confirm the diagnosis and treat the patient, always within a range of uncertainty.

And what determines our treatment threshold? Well there are several factors involved. The greater the risk, cost or adverse effects have the treatment in question, the higher the threshold that we will demand to be treated. In the other hand, as much more serious is the possibility of omitting the diagnosis, the lower the therapeutic threshold that we’ll accept.

But it may be that the post-test probability is so low that allows us to rule out the disease with reasonable assurance. We shall then have crossed our second threshold, the diagnostic one, also called the no-test threshold. Clearly, in this situation, it is not indicated further diagnostic tests and, of course, starting treatment.

However, very often changing pretest to post-test probability still leaves us in no man’s land, without achieving any of the two thresholds, so we will have to perform additional tests until we reach one of the two limits.

Finally, I just want to stress the importance of diagnostic tests’ properties to move from one probability to the other and reach one of the two thresholds: sensitivity, specificity, predictive values and likelihood ratios. Familiarity with these properties is essential to determine the performance of the test, especially when it is costly and carries a risk or discomfort to the patient. But that is another story…