A few days ago I was with my cousin in our neighborhood parties and to entertain a while, we were firing a shot at one of the booths, to see if we could take the teddy bear.

But nothing, not by chance.

I shot a lot of times, but got no buckshot in the target. They were all around, but not one in the center. My cousin, however, is a crack shot. The problem is that he got a shotgun with a twisted look, so he went all deviants buckshot and not put any into the target. In sort, we were left with nothing. 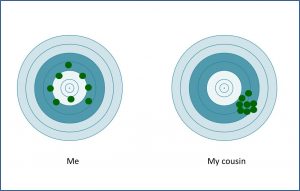 In the figure attached you can see the mesh of shots that we both did.

Anyway, and to take advantage of this situation, looking at the targets it occurs to me that the situation bears some resemblance to the two types of errors that we can have in our epidemiological studies.

These are, in general, two: random error and systematic error.

Random error is due to our friend the chance, of whom there is no way to escape. You can have two fundamental causes. First, the sampling error. When we get a sample of a population we do it with the aim of estimating a population parameter through the study of an estimator of that parameter in the sample. However, due to sampling error we can obtain a sample that is not representative of the population (if we get several samples, all will be slightly different from each other). This happens especially when sample sizes are small and when we use sampling techniques other than probabilistic.

The other source of random error is the variability in the measurement. If we take the blood pressure several times, the results will be different (though similar) because, on the one hand, biological variability itself and, secondly, to the imprecision of the measuring device we use.

This random error will be related to the accuracy of the result. A measure will be more accurate the smaller its random component is, so we can increase the accuracy by increasing the size of the sample or by being more careful with measurements.

In our example of the shot, I represent the random error. I stray shots at random, so that by the cloud of impacts can be imagined where the target is, but no shot reaches it. Logically, the more shots you do the more likely it is to hit the center, albeit by chance.

The second error we mentioned is systematic error, also called bias. This is due to an error in the design or analysis of the study, which produces an incorrect or invalid estimate of the effect we are studying. In our example, as you may have guessed, my cousin represents the systematic error. He shoots very well, but as the gun is poorly calibrated, give shots off the target, turning aside all systematically in one direction. Seeing only the shots we cannot imagine where the center is, as we saw with my shots in my target, because we would think that the center is in a location that actually does not belong. Thus, the random error affects the accuracy, while the systematic compromises the validity of results. And another thing, though my cousin increase the number of shots, they will keep coming crooked. The systematic error does not decrease because we increase the sample size.

And here we will leave for today. We have not talked anything about the types of systematic errors, there are several. They can be divided in selection bias, information and analysis that, in turn, can be divided into many others bias. But that is another story…